lostangelsoul3! 🌈🎂🎁🎉🎊🍰🎈 I hope it's a good one. ❤️ There's a Drarry in the works for you, unfortunately it comes a little latter in the story arc I'm writing (actually, technically earlier, bygones) and I was unable to make the jump between the two stories. But! The plot is laid out and it *will* happen in time. I hope you can forgive the delay? In its stead, however, I offer a picture of my stonking great alliums and the two fine young men in question: 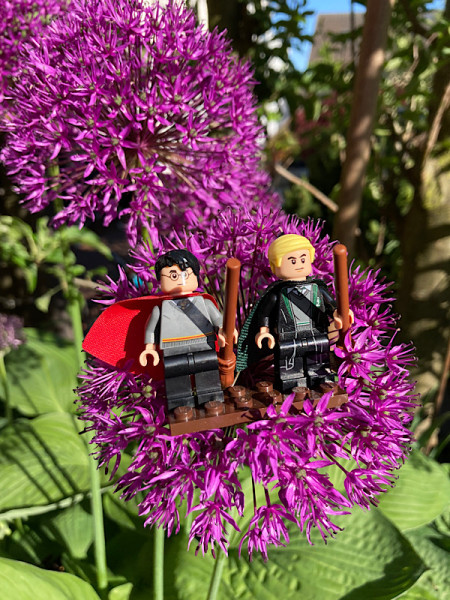 "Damnable Whiz-bangs," Draco mutters, manoeuvring his broom with some skill around the latest burst.

"I think that's 'fireworks'," Harry corrects as he catches up to him, a wandless Protego protecting them both from the latest barrage, and potentially still legal on the pitch. Not, mind, that the explosions were precisely regulation, clearly not, but he does make an effort to abide by at least these rules if none others. It was marked enough a characteristic that Snape had commented on it.

"Most definitely not. They're Globemaster if anything. Have you never paid attention in Herbology, Potter?" Draco scoffs and then with a smirk adds, "Of course not. What was I thinking?" As if the universe were exacting its revenge for that bit of snark, he immediately has to duck under the latest explosion, too close to his head for comfort. Briefly he wonders if that will leave his hair singed. Not to be outdone by the Moggie, anything but that, he wandlessly Depulsos the next burst out of Potter's way.

"Thanks," Harry says, annoying the Slytherin further. It's as if he lives to show up Draco's inadequacies. He resolves to at least consider expressing his gratitude moving forward. Well, briefly. Blast and blast again. The rival Seeker is nothing if not irksome. Except for possibly too close. Draco tries to put on some speed and pull ahead, dividing his attention between scanning the sky for the Snitch as well as more of the Whiz-bangs.

It doesn't escape Harry's notice that no one seems to be calling the egregious fouls. This isn't the first time the difference in the way they're treated has registered, not even in this match alone. If this is what the (ir)responsible parties are willing to risk out in the open in front of the entire school, he imagines there's been a good deal more of the abuse when no one else was around to see it, too. All in all it's a wonder Draco is back to sniping at him, he thinks with a small smile. At the beginning of term, they'd barely been able to coax a few words out of him.

It also doesn't escape Harry that the Whiz-bangs tend to stop whenever he draws closer, just like the assorted Hexes and Jinxes. Lips drawn tight in anger at the thought of Malfoy's unfair treatment, he leans forward to pull closer again. With a bit of luck, the blond might survive the match uninjured yet...


Ooodles of love and many happy returns of the day. 😊

adafrog had asked if all of the builds together make a final scene, or if they're self-contained. I figured it might help to do a last shot of everything together to better illustrate the answer. (And let the players take their bows... 😉) 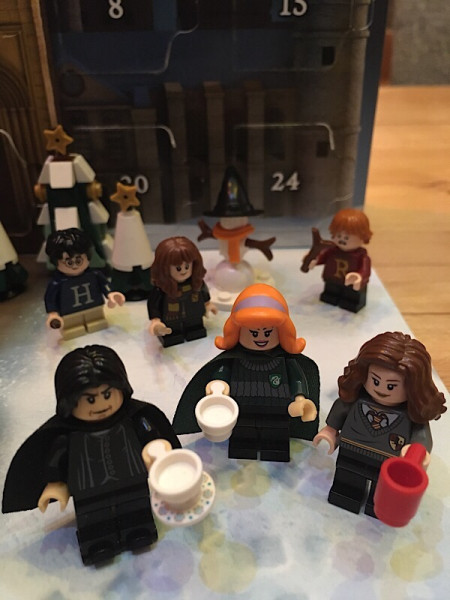 And that's about it. The minifig team thanks you for reading. ❤️

'We have another door to open, if you'd care to do the honours?'

Gladly, he replies and makes short work of it. 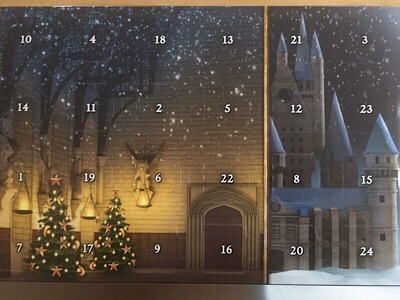 ( Collapse )
Ah! This is promising! For the first time, he sounds like he actually means it.

'Well the colours are suspicious.'

As are the shapes.

Give it a try and see.

It doesn't take her long.

( Collapse )
His lips tighten into the thinnest of lines and he says nothing. The moment stretches uncomfortably, silence reigns.

( Collapse )
Put it all together and you get...